I walked into that first session, and I remember thinking, I shouldn't be here.

Thank you Single Mother Ahoy
This is the link to this great blog where you can read more of her writing.
http://www.singlemotherahoy.com/2013/09/Freedom-Programme.html?spref=tw

I've written before about my health visitor, and how I believe she saved my life.

Before I left, she wrote three things in S's red book, and told me she wanted me to have done them by the next time we spoke:
I thought my health visitor was batty and over-reacting to what was just a relationship breakdown.
I hadn't been abused, I was just difficult to get on with; we had just been incompatible; I had just been hard work.
I shouldn't change my phone number; S's father should be able to contact me (and send me abusive nastiness) whenever he wanted to. Changing my number would make him angry because I was deliberately being difficult again.
I shouldn't call the police; that was clearly making mountains out of molehills and deliberately trying to cause trouble where there wasn't any. And there definitely wasn't any real trouble, because everything was my fault, and my responsibility, and I really should be making more of an effort to maintain communication with S's father so that he could see her, even though he wasn't paying maintenance or showing more than a passing interest now that he had replaced us with a new girlfriend and her 3 month old baby.

But I was scared of my health visitor. Not because she was nasty; she was (and still is) lovely. I was scared because I had absolutely no confidence in my ability to look after S. I didn't want to say or do anything that would make the health visitor doubt me. I saw her as a person who had the power to have my baby taken from me, and that petrified me. So I did as I was told. 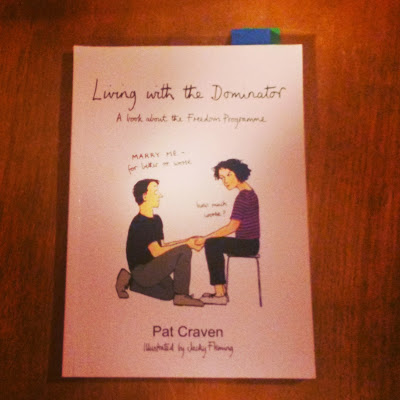 The Freedom Programme is a set programme of sessions. When I started, they'd already done a few sessions but I think after speaking to me on the phone, the organiser realised I couldn't wait until the next one. I started in the middle of the programme. They didn't have a space in the creche for S, so she came with me.

The sessions were run on a Tuesday morning, at my local children's centre, which happened to be just around the corner from where S's father worked. I felt sick sneaking in there, and was glad they had a policy of keeping the front door locked while the session was running. I was so scared I would be seen, and he would tell me off for trying to cause trouble for him.

I walked into that first session, and I remember thinking, I shouldn't be here. I am not one of these women. I do not belong in this room. And then the group leader began talking about the character they called The Dominator, and all the ways they use to control us. This week's session was on The Sexual Controller. She gave us a handout with a list of things he will say or do to keep you in your place. I started to read it, and I felt my stomach drop. I was shaking, almost in tears.

I wasn't making it up; I wasn't over sensitive; I didn't just bruise easily, I wasn't mad. This piece of paper read as if someone had been listening in on our conversations over the last few months. This piece of paper made me feel instantly justified in being there, and sick to my stomach with guilt that I had stayed there for so long.

I had been in an abusive relationship.

I had been abused.

I did belong there after all.

I spent most of that first session crying, telling the group leader that I was scared to change my phone number, that I didn't know what to do, that I felt guilty for leaving his children.

But I left the session feeling empowered. I left feeling positive and strong. I remember walking out of the building with S in the sling, not caring whether I was seen leaving or not. As I took my mobile from my pocket I saw several new texts, all from him. I read them, but I didn't respond. When I got home, I called the network and changed my number; it was easier than I thought.

Then I called the police and told them what had been going on. They sent an officer round, who spent a while filling in forms and asking me specific questions about whether I felt that I was in danger, whether I had felt threatened in the past etc. As she left she suggested I buy a curtain to go over my front door, so that anyone coming to the door couldn't automatically see whether I was in. I remember saying goodbye to her, closing the door and going back to the living room, to wait. Although I had told the police I didn't want them to speak to my ex, because I was scared of repercussions, I was convinced he would somehow find out I had "told" on him and that I would be in for some trouble.

As it was, nothing happened. I continued going to the Freedom Programme. Each week we looked at a different persona that abusers will adopt in order to control: the king of the castle, the bully, the bad father, the headworker. Each week it really was as if the group leader had been watching my life, had met my ex before. She and other women in the group were telling me stories that sounded so incredibly similar to my own. The examples we were given of the things an abuser (Dominator) will say and do in order to control you were him, word for word. Seeing that it wasn't just me, that I wasn't over-sensitive or trying to cause trouble, made me realise how important it was that I stay away.

The Freedom Programme finished a year ago.
When it finished, it was still hard. It was still a daily struggle to stay strong, to not go backwards. Every time I heard from him I started to slip a little.
But as time went on, I grew stronger. I spoke to a few people, who told me a few things. We compared notes, compared things he had said and done. And with each conversation I grew a little stronger. With each week that passed, I grew stronger.

I bought the book that goes with the Freedom Programme. I've found it unbelievably useful to be able to read and re-read the descriptions, the lines they come out with, the actions. And also the descriptions of what a non-abusive, reasonable man will say and do.

I will not lend you this book; I still need it. I still read parts of it from time to time, and it is still very important to me. I need to keep reminding myself, so that I never allow myself to be in that position again.